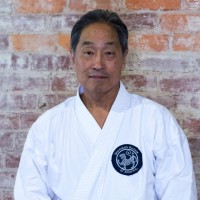 John Teramoto (Godan*) began training with Mr. Tsutomu Ohshima, founder (Chief Instructor) and founder of Shotokan Karate of America (SKA), in 1963 at the age of 13 while a student at Maryknoll Elementary School in his native Los Angeles, CA. Mr. Ohshima one day appeared at the school to become the new Japanese language teacher. At the time, John had no idea who Mr. Ohshima or what karate was. He simply decided he wanted to learn martial arts from the man. He gathered his 6th-, 7th-, and 8th-grade schoolmates, and they formed what might be the first elementary school karate group in the world (the group celebrated its 50th Anniversary in 2013). John received his Godan (5th degree black belt—the highest rank granted and recognized by SKA) from Ohshima Sensei in 1990. From 1998 to 2017 he served as President of SKA’s Black Belt Council (yūdanshakai) and from 2017 to 2018 he served as President of SKA.  In 2020 Dr. Teramoto was named Shihan of SKA.

Dr. Teramoto did his undergraduate work at Loyola Marymount University in Los Angeles, and he received his M.A. and Ph.D. degrees from the University of Michigan in Ann Arbor, MI, in the field of Asian Art History. He has spent many years in Japan studying the language and as a visiting graduate student at the Tokyo University of Fine Arts. He has also lived in Japan as a Fulbright-Hays scholar, as a professor at the Japan Center for Michigan Universities in Hikone, Shiga Prefecture, and most recently as a visiting professor at the prestigious International Research Center for Japanese Culture in Kyoto. Now, as in the past, whenever he is in Tokyo he practices at Waseda University, Ohshima Sensei’s alma mater, with members of the Waseda University Karate Club.

Dr. Teramoto moved to Indianapolis in the fall of 2000 to take a position with the Indianapolis Museum of Art where he is currently the Curator of Asian Art. 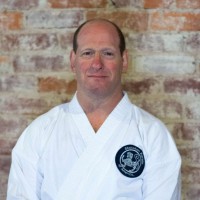 Brad Markisohn (Sandan) was born in St. Louis, MO, in 1958. He began his karate training with the SKA group at the University of Delaware in 1982. Without any real knowledge of martial arts, but with a strong interest in finding our more, he joined the University of Delaware Shotokan Karate Club and continued practicing until he graduated and moved to Indiana to attend graduate school at Indiana University.  During that time he received his Shodan (1st degree Black Belt) from Ohshima Sensei in 1988. He has led karate groups at Indiana University in Bloomington and also in Indianapolis since the late 80’s. He has been training with John Teramoto since 2000, and he received his current rank of Sandan (3rd degree Black Belt) in 2006. Mr. Markisohn serves as the dojo leader for the Indianapolis Shotokan Karate Dojo. He travels to Southern California to practice with Mr. Ohshima several times a year, and he also travels to practice with SKA members in other regions.

Mr. Markisohn did undergraduate work majoring in Geology and Physics at the University of Delaware, and he did graduate work at Indiana University in Bloomington, where he earned his M.S. degree in Geophysics. He held several technical and managerial positions in the medical diagnostics and consumer electronics industries. He currently manages the development of diabetes products in Roche Diagnostics Diabetes Care Division. 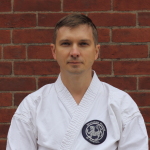 (Sandan) was born and raised in Russia. Vladimir did his undergraduate work in Mathematics at Novosibirsk State University and received his PhD in Mathematics from Purdue University after moving to the United States. He had worked for few years at IUPUI teaching mathematics and conducting research in mathematical applications in cancer diagnostics. Currently, Vladimir works at Roche Diabetes Care. 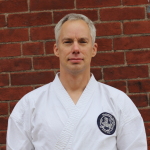 Todd Chilton (Shodan) was born in 1963 in New York City, and has lived in Indiana since 1992. His martial arts training originally began with Tae Kwon Do and Gojū-ryū karate in high school and college. He took a break from training in the 1990’s while finishing school and working full time.  By 2005 he felt something was missing, that he needed something more from his life.  As he puzzled over this, he discovered he missed practicing martial arts.  He looked at several dojos but decided to join the Indianapolis Shotokan group.  When asked why, he said, “I called the dojo and was invited to watch a practice.  I noticed the students had a great attitude, they actually cleaned the floor before the class to make sure it was ready for them to practice.  During the class, the instructors emphasized making strong techniques that really worked.  They practiced fighting drills not just for tournaments, but for facing an opponent strongly, both mentally and physically.  I could see the instructors enjoyed teaching, and wanted the students to get a high quality experience from the class.  I liked the way the instructors challenged the students to face problems with a strong karate attitude – this was what was missing in my life.  I knew I was in the right place.” He earned his Shodan (1st degree Black Belt) in 2010. Dr. Chilton is a psychologist with the Indianapolis VA Medical Center. 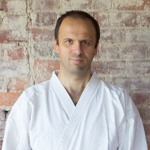 Igor Gejdos (Shodan) began his karate training with the SKA Butler University Karate Club in 2007 per suggestion from Bard Markisohn. As a brown belt, he took 3rd place in 2013 and 1st place in 2014 at the Midwest Jiyū Kumite Tournament in Memphis, TN. He received his Shodan (1st degree Black Belt) in 2014. His business travels have allowed him to practice with other SKA groups in the US, and with our affiliate groups overseas. Igor has a Master of Science degree in Computer Science from Indiana University-Purdue University Indianapolis, and he currently works on developing medical devices.

Rachel Richardson (Nidan) joined SKA in 2004 as an undergraduate in hopes of learning more about martial arts and doing something fun for exercise. She earned a BS in Biology in 2006, and continued studying Shotokan karate after leaving university. Throughout her karate journey, Rachel worked as a barista, a bookseller, a laboratory technician, and a marine biologist in the Gulf of Alaska. She received her Shodan (1st degree Black Belt) in 2010. Around that time, Rachel went back to school, ultimately earning a PharmD from Butler University in 2016. She currently works consulting for oncology health outcomes research. When not studying karate, Rachel fills her time with writing, podcasting, and playing games with friends.

John Karpicke (Shodan) was born in Saginaw, MI, and he has lived in Indianapolis since 1981.  He began training after overhearing that his colleague, Brad Markisohn, was practicing karate. He met John Teramoto in 2000, and he received his Shodan (1st degree Black Belt) in 2006. John did his undergraduate work at Michigan State University and has a Ph.D. in Psychology from Indiana University. He is a US Navy veteran who served in Vietnam in 1969. John’s work career includes being an Assistant Professor at Valparaiso University, a Distinguished Member of Technical Staff at Bell Laboratories, a Project Manager and Program Manager at two engineering start-ups, and a self-employed consultant. He is currently an Engineering Support Principal at Roche Diagnostics Corporation.

Jason Wright (Shodan) was born in Anderson, Indiana. He originally began training in 2003 when the group was part of Butler University. He was introduced to practice by an old high school friend who was training. He took up his friend’s invitation to come watch. “When I came to watch practice for the first time, I was very impressed by the strong spirit given by all and knew this was something I wanted to try”. Practice has helped Jason with his physical health, career, as well as improving his mindset and perspective on life. “Thanks to my seniors, I have an appreciation for an art that is very deep and challenging. Something that I just happened to stumble into by chance”.
Jason is an audio/visual technician working for a commercial integrator with over 20 years of experience in his field. Outside of tuning and commissioning project installations, he enjoys working as a sound operator for various events as well as playing and writing music.